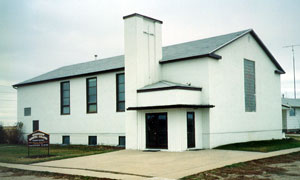 The Woodrow Gospel Church is located in Woodrow, SK. It began services in 1909 and formally organized with 28 members in 1910. The first building was built in 1916. The congregation originates from emigration from North Dakota. The church was first known as Hoffnungsfeld and later as Woodrow Mennonite Brethren Church.

The language of worship is English. The transition from German happened in the 1930s.

The fonds consists church bulletins and a baptism record.