2 cm of textual records and 1 photo 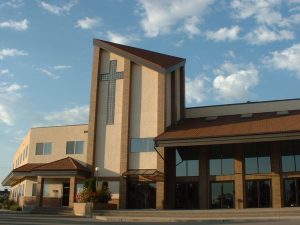 Willow Park Church in Kelowna, British Columbia, started in 1947 by Mennonite immigrants who had come from the Soviet Union after the Second World War. They had been worshipping with the Grace Baptist Church. The Mennonites elected a temporary leadership team for their Sunday meetings. The 32 members organized the Kelowna Mennonite Brethren Church. Rev. John Unger was confirmed as leader, Peter Janzen as assistant leader and Sunday school superintendent, Cornelius Janzen as treasurer, Aaron Willms as Missions treasurer, and Abram Schellenberg as secretary.

Services for this new church were initially held in the home of Herman Goertzen and later in rented halls in the city. By 1947, a church building was under construction with volunteer help. By January 18, 1948, services began in the basement and by 1963 the switch from German services to English worship services had taken place.

In 1966, a new building was built to seat over 430 people and provide needed educational space. In 1985, a new church known as Project Willow Park was undertaken and was ready for occupancy in October 1988. With the move to a new location came the new name of Willow Park Church.

The church continued to grow. The church responded with two morning services starting in 1992 and started a church plant in the Glenmore area in 1995 known as the Garden Valley Community Church.