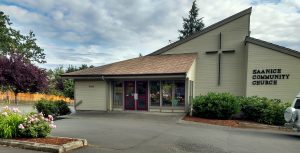 The Saanich Community Church in Victoria, British Columbia, was started in 1968 through mission work of the B.C. Conference of Mennonite Brethren Churches and Mennonite migration into the area. John and Evelyn Baerg were sent by the Conference’s Church extension program in 1968 and were helped by George and Carol Braun in 1970.

In 1971, a charter was signed with 18 charter members officially founding the congregation. It became a member of the Mennonite Brethren family of Conferences in 1973.

For the next few years, they met in homes and community centres. In 1975, they purchased a facility, and the Brauns were appointed full-time pastor couple and they remained pastor couple of the church until 1979.

This fonds consists of history, a bulletin, and congregational meeting minutes.