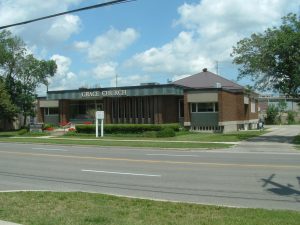 During its first year, Grace was served by various guest preachers, and implemented such activities and programs as Sunday school, prayer meetings, and numerous social events. During its first two years Grace conducted its services in the Keffer Chapel at Waterloo Lutheran Seminary, located on the campus of Wilfrid Laurier University.

In October 2003, the congregation began conducting its services in the Great Hall of Conrad Grebel University College. After completing extensive renovations to the Walterfedy building located at 546 Belmont Avenue West in Kitchener, Grace began worshipping there in September 2013.

The Grace facility at 546 Belmont Avenue West is serving as the home for various community groups including the Eritrean congregation.

This fonds contains bulletins, newsletters, and calendars from the Grace Mennonite Brethren Church. These documents provide a history of the church, its method of outreach and its ministries.

Records were transferred to the Centre for MB Studies archives in Winnipeg, Manitoba by email.