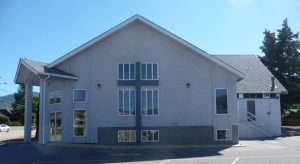 The Grace Mennonite Brethren Church of Penticton, BC, had its roots in 1957 when the Associated Gospel Churches (AGC) of Canada opened up work under the name of Grace Gospel Church. In 1960, a church building was constructed that was used for many years.

In 1982, a spokesperson for a potential Mennonite Brethren church in Penticton approached the A.G.C. board chairman with questions about a possibility of an amalgamation with the proposed Mennonite Brethren work. Discussion meetings were held, and, on March 7, the first joint Sunday service was held.

On April 18, 1982, the church was officially chartered as the Grace Mennonite Brethren Church with 57 members. The newly formed church welcomed its first resident pastor couple, Rev. and Mrs. Edward Hamm, on September 19, 1982. They ended their pastorship with Grace MB Church on July 28, 1983, and on February 19, 1984, the church held a commissioning service for their second pastor couple, Hart and Louise Loewen.

In 2018, the congregation agreed unanimously to close. A closing celebration service was held on 20 May 2018.