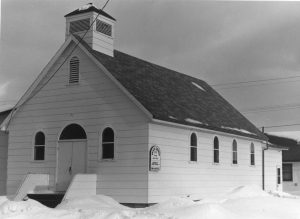 The Grace Church congregation grew out of efforts of the Presbyterian Church to serve the community of Cranberry Portage beginning in the 1930s. In 1966, school teacher George and Helen Penner moved into the community with their family. They had Mennonite Brethren roots and chose to become active lay leaders in the Knox Presbyterian Church that was struggling to remain viable.

The language of worship is English.

Records were transferred to the Centre for MB Studies archives in Winnipeg, Manitoba. In 2017 and 2018, lay leader Bob Hay deposited documents relating to the congregations early years, 25th anniversary, and 40th anniversary.