9 cm of textual records and 5 photographs 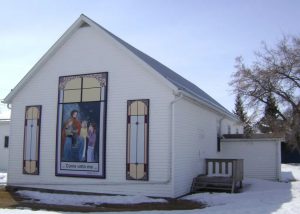 The Blaine Lake Gospel Chapel, located near Petrofka, is a member of the Canadian Conference of the Mennonite Brethren Churches, Northern District. In 1906, Herman Fast came to the Petrofka school to teach the Russian language and to conduct gospel services in the school and in homes. People who attended these services decided to build a church in the country. Wasyl Wasilenko and his brother-in-law Nicholas Boulanoff, whose farms were adjacent to each other in the Harmonia district, each donated an acre of land for the church site. The structure was completed in 1912.

In 1918, Wasyl Wasilenko was ordained as minister and Paul Makaroff as deacon. After Wasilenko moved away in 1924, the Mennonites at Blaine Lake attended Baptist services.

In the 1940s, the members decided to move the Mennonite church from the Harmonia District to the town of Blaine Lake. The building was moved to 107 Railway Avenue West. From 1944 to 1956, the church was under the leadership of John Koval, a local storekeeper, who conducted services in the Russian language. When the church membership grew, members built an addition to the existing building. Services in the 1950s were in both Russian and English languages. By 1959, the Russian-speaking people met separately and services at the church were in the English language.

Two women's groups emerged from the congregation. Beginning in the early 1950s, the Ladies Mission Circle supported and corresponded with various missionaries and mission agencies. The Christian Literature Helpers first met in 1960 and supported groups involved in distributing Bibles and Christian literature.

The church went through several name changes. At first it was a Mennonite Brethren Church at Petrofka. It became the Baptist Mennonite Union Church of Blaine Lake when the two congregations worshiped together. When the Baptists moved away, the name again became the Blaine Lake Mennonite Brethren Church. Then in 1967, to encourage attendance by people of all denominations, the name was changed to Blaine Lake Gospel Chapel. Also in 1967, the church was accepted into the Saskatchewan conference with a membership of 11.

The language of worship is English.  The transition from Russian occurred in the 1950s.

This fonds consists of historical notes about the Blaine Lake Gospel Chapel, several photographs of the church and manse, 2 ledgers containing membership records and minutes of the Petrofka church (1918–1940), 2 files of minutes covering 1965–1997, an essay about the conflict between Russian Baptists and Mennonite Brethren in the 1950s, an article about Mennonite Brethren ministry to Russian and Jewish people, minutes and financial records from the Ladies Mission Circle and the Christian Literature Helpers groups, and correspondence from missionaries and mission agencies to the Ladies Mission Circle.

File 1 came from the Bethany Bible School archives while file 2 was already at CMBS. Files 3–6 came from Blaine Lake Gospel Chapel in October 1998 via moderator Arnold Stobbe (Acc. No. 1998–053). Files 9-12 came from the Saskatchewan Mennonite Brethren Conference in 2009 via Doug Heidebrecht (Acc. No. 2009-42).